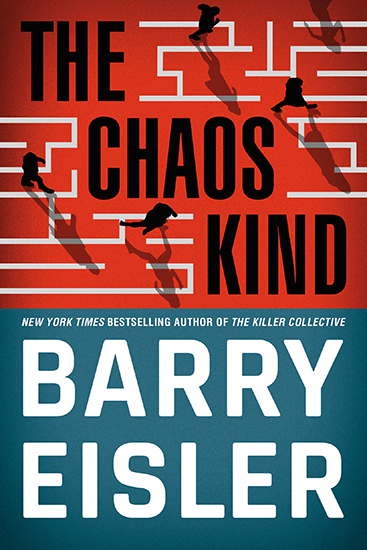 The assassins of Barry Eisler’s #1 bestseller The Killer Collective are back—and this time, it’s chaos.

Assistant US Attorney Alondra Diaz hates traffickers. And she’s determined to put one of America’s most powerful financiers, Andrew Schrader, in prison forever for his crimes against children.

But Schrader has videos implicating some of the most powerful members of the US national security state. To eliminate Diaz, the powers that be bring in a contractor: Marvin Manus, an implacable assassin whose skills have been forged in intelligence, the military, and the hardest prisons.

Enter former Marine sniper Dox and black-ops veteran Daniel Larison with an unusual assignment: not to kill Diaz, but to keep her alive.

A lot of players are determined to acquire the videos and the blackmail power they represent. But with Seattle sex-crimes detective Livia Lone, “natural causes” killer John Rain, and Mossad honey-trap specialist Delilah, the good guys might just have a chance.

“Another high-fatality, high-spirited revenge fantasy…”
—Kirkus Reviews
“Pure action seekers will gasp at the brutal violence and raw hand-to-hand combat…”
—Publishers Weekly
“Fans of the first book will be delighted, and those who are unfamiliar will be pulled in by the audiobook’s breakneck pacing and blockbuster movie feel.”
—AudioFile Magazine
“The action and fighting are always presented within a brilliant narrative and great overall story…”
—Christopher P. Hood
“Eisler proves to be a masterful storyteller, as he spins a fascinating and relentless tale of escalating tension, building to an amazing denouement.”
—Mystery & Suspense Magazine