“Eisler’s eleventh novel to star John Rain, the former CIA agent and now mostly retired freelance assassin, is a spectacular revenge story. Andrew Schrader has bought and blackmailed himself out of child-pornography charges (even though he’s clearly guilty), but U.S. Attorney Alondra Diaz refuses to let him get away with it. She assembles a team of professionals, including Rain, to bring the man down, but it turns out the powerful people Schrader had blackmailed have no intention of getting caught up in Diaz’s investigation, and they assemble their own crew. Violence and mayhem ensue. Eisler, who was briefly a covert operative for the CIA, has an energetic writing style: his dialogue gets right to the point, and his action scenes are clean and vividly rendered. The John Rain novels seem to fly under the radar of many genre fans, even though they deserve to sit alongside Lee Child’s Jack Reacher novels and Vince Flynn and Kyle Mills’ Mitch Rapp thrillers.”
—Booklist

Wealthy financier/predator Andrew Schrader was caught seven years ago importing young girls for sex to his South Carolina compound on an industrial scale. But his success in capturing so many high-level government types on video disporting themselves on the premises allowed him to grab a plea bargain to a single misdemeanor, with no jail time. Now that he’s moved to a Washington island and is back to his old tricks, assistant U.S. Attorney Alondra Diaz intends to drag him over the coals. She has the unstinting support of Seattle PD Detective Livia Lone, who has excellent reasons for going after men who prey on underage victims, and the logistical assistance of retired assassin John Rain, nonretired assassin Marvin Manus, the CIA’s Tom Kanezaki, and his helpers, tech whiz Maya and sniper Dox. It’s a formidable lineup, and it needs to be, because the same insiders who kept Schrader out of jail to save their own faces last time are even more firmly ensconced in the seats of power. U.S. Attorney General Uriah Hobbs, Director of National Intelligence Pierce Devereaux, and CIA director Lisa Rispel can command endless squads of tech-busters and hit men to keep Schrader from talking or activating the dead man’s switch that would release all those compromising videos posthumously. The heroes with the white hats would seem to be hopelessly outgunned and outspent—unless the forces arrayed against them should turn on each other.

Another high-fatality, high-spirited revenge fantasy in which most of the casualties don’t even have names.”
—Kirkus Reviews

“Eisler’s story—with its colorful cast of characters, pulse-pounding action, and snappy dialogue—is fantastic in audio form. Fans of the first book will be delighted, and those who are unfamiliar will be pulled in by the audiobook’s breakneck pacing and blockbuster movie feel.”
—AudioFile Magazine

“The action and fighting are always presented within a brilliant narrative and great overall story…”
—Christopher P. Hood

“Eisler proves to be a masterful storyteller, as he spins a fascinating and relentless tale of escalating tension, building to an amazing denouement…This gem can be enjoyed as a standalone due to the seamlessly supplied backstory.”
—Mystery & Suspense Magazine 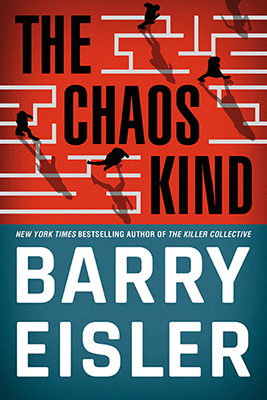