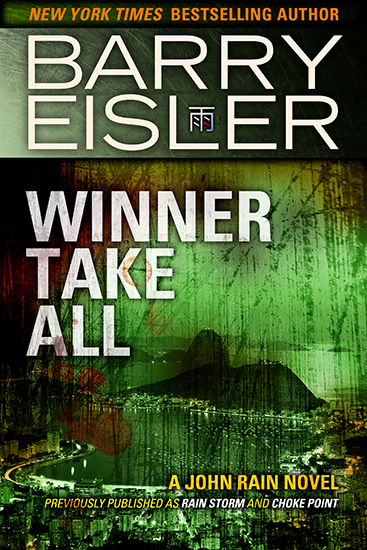 John Rain has disappeared to Brazil to escape the killing business and the enemies encircling him in Japan. But the CIA isn’t willing to lose its premier “natural causes” contract killer, and they force Rain to take on a high-risk assignment: eliminate a ruthless arms dealer operating in Southeast Asia.

The upside? Financial, of course, along with the ongoing chimera of moral redemption. But first, Rain will have to survive the downside: a second assassin zeroing in on the target; the target’s consort, an alluring and dangerous woman with an agenda of her own; the possibility that the entire mission is nothing but an elaborate setup. From the gorgeous beaches of Rio to the glitzy casinos of Macau to the gritty back streets of Hong Kong and Kowloon, Rain becomes a reluctant player in an international game far deadlier and more insidious than any he has encountered before.

“In his superb thriller series featuring charismatic Japanese-American assassin John Rain, author Barry Eisler serves up steamy foreign locales, stunning action and enough high-tech weaponry to make for an A-plus boys-and-their-toys read.”
—New York Daily News
“…with each book he climbs ever further up the ladder of excellence with well-crafted plots and adrenalin-filled action scenes that keep the suspense razor sharp. But his biggest asset is Rain—the coolest, sexiest killer on the block…”
—Daily Record
“…Where [Rain]—and Jitpleecheep—excel is in giving us, and perhaps more importantly the vast mass of untravelled American thriller readers, a glimpse of the world through alien eyes. They also pack one hell of a punch….”
—London Times
“…there’s no denying that this author can bring a wicked martial-arts encounter right into the mind’s eye (quite a feat, considering the need for speed and complexity of movement) or that he’s surprisingly nimble with his love scenes.”
—Kirkus
“The Rain series keeps on getting better.”
—Booklist