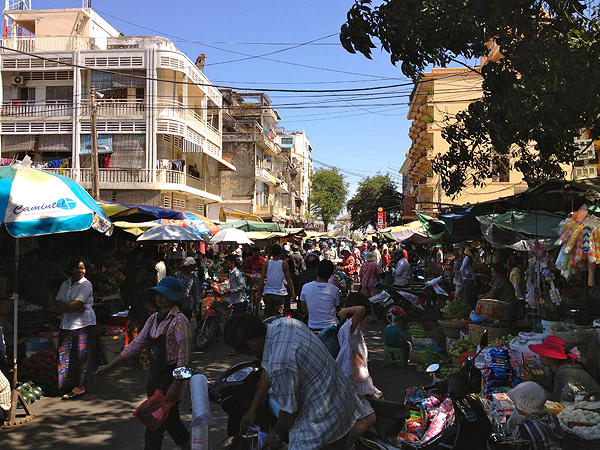 “He zigzagged southwest, checking his back along the way. He didn't think he'd been followed from the hotel, but it was hard to be sure here, it was too chaotic. The streets were choked with shifting knots of shoppers crowding under the shadow of stall umbrellas so jam-packed they formed a kind of tent city encroaching to nearly the center of the street. A low cacophony enveloped him as he walked: tuk-tuk drivers honking their horns; scooters buzzing through cracks in the mass of pedestrians; shouts and cries and laughter. Overhead, power lines stretched haphazardly from building to building like baling wire strung by a blind man. On all sides, people haggled over everything imaginable: shirts and shoes and underwear; quartered chickens and beef and fresh fish on ice; all manner of refurbished electronics. The air was redolent of diesel and the unforgettable rotting-sewage smell of Durian fruit. He loved all of it.”