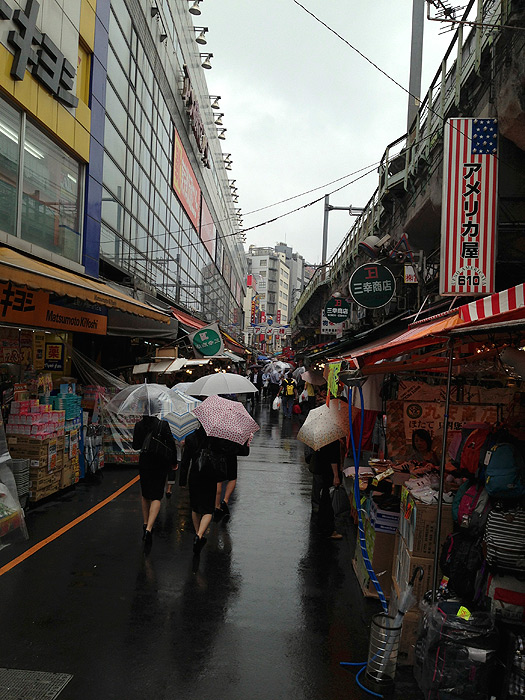 Another view of Ameya. “It was a typical summer afternoon in Tokyo, which is to say oppressively hot, humid, and polluted, and the air was heavy with the smells of yakitori and takoyaki and the other street delicacies of Ameyoko. Hawkers held their hands to either side of their mouths and cried out, Hai, dozo! Hai, irasshai! this way and that over the sounds of nearby truck traffic and the occasional passing train, gesturing to shoppers being carried along by the slow-moving pedestrian river, entreating prospects, handing out samples, reeling in customers from the endless, shifting flow. I bought a cup of iced watermelon juice from a rheumy-eyed oyaji who looked like he'd been manning his fruit stall from the time the city had been called Edo. He took my ten yen with a wordless, toothless smile, and I moved off, sipping gratefully, sweat trickling down my back under the slight pressure of the empty shoulder bag I'd taken from Miyamoto, the late afternoon heat seemingly magnified rather than alleviated by the awnings draped haphazardly over either side of the alley.”