“The Detachment will give John Rain fans what they have been waiting for: a daring adventure in which their hero is not only fully engaged, but also as deadly and as calculating as ever—yet somehow more trusting, and more human.”
—Alan Jacobsen, The New York Journal of Books

“One of the best surprises in the international intrigue genre during the past decade was the creation of the John Rain series by ex-CIA operative Barry Eisler…The seventh John Rain thriller is The Detachment. The book begins with my kind of action.”
—Wayne C. Rogers, Las Vegas Review-Journal

“Living in quiet semi-retirement in Tokyo, John Rain tries to avoid his old life as an assassin until a group of men approaches him with an offer difficult to refuse. Colonel Scott Horton wants the group to assassinate three targets who are attempting a coup: the director of the national counterterrorism center, the president’s counterterrorism advisor, and a Supreme Court justice. Rain and his companions—Dox, Larison, and Treven—discover they have unwittingly put the coup in place and are blamed for a series of false flag attacks on U.S. soil that spark national outrage. Full of twists, turns, and double-crosses, this team of assassins travels from Tokyo to Vienna to Washington D.C., avoiding secret prisons and presidential hit lists. Rain, Dox, Larison and Treven’s group dynamic is strong and their motives are always clear. Dox makes an excellent comic foil for Rain and the borderline-sociopathic Larison, but readers will find all four as sympathetic and likeable as one could possibly find a group of trained killers. Fans of Eisler will be thrilled, and new ones will be inspired to go back and look at his previous work.”
—Publishers Weekly

“The Detachment is the sixth in Barry Eisler’s series featuring the half-Japanese freelance assassin John Rain.

With al-Qaida readying a new attack on the United States, Rain, now living in Tokyo, is brought out of semi-retirement by Col. Hort, head of America’s most deadly covert hit team, the Intelligence Support Activity. Hort needs Rain back on the job to surgically eliminate an American security risk. Or so Rain is told.

Against his better judgment, Rain is forced to work with a second team, Treven and Larison, men even more merciless and mercenary than himself. Trusting neither, Rain brings in backup in the form of an ex-Marine sniper named Dox, the only man in the world close to being his friend.

After successfully taking out two targets, the four killers realize Hort has set them up and they’re now expendable. Despite their mutual hostility and mistrust—after all it’s paranoia that’s enabled them to survive so far—they realize their only chance lies in cooperation.

But this presents a difficult quandary. How do four killers suppress their reflexive fight-or-flight response, even when they accept it has become their greatest vulnerability?

Eisler, who has an intelligence background, lets one of his characters eloquently explain the predicament that every protagonist in contemporary espionage fiction now faces: “There are just too many ways the opposition can get a handle on us now. Video cameras everywhere, surveillance drones being deployed over American cities, the NSA spying domestically, the government and all the Internet and telecom companies working together, satellites and supercomputers crunching data … I think we’re in a world now where, if the man wants to find you, you’re going to get found.”
—Mark Schreiber, The Japan Times 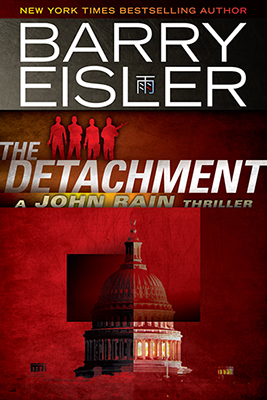